Rockies trail and cruise to the Glaciers, 17 Days.

Rockies trail and cruise to the Glaciers, 17 Days 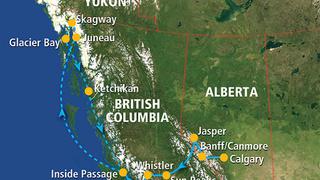 The majestic vistas, expansive protected parklands and western Canadian culture combines with an unforgettable Alaskan Cruise up the Inside Passage on a captivating 17-day coach and cruising tour. The relaxed lifestyle of the Alberta ranchlands give way to the national parks of the Rocky Mountains, teeming with wildlife amidst spectacular and unique geography. The high mountains of Whistler and the Coastal range are the gateway to the historic streets of Vancouver. Boarding a comfortable, full service Holland America Cruise, sail north through the dramatic scenery of the Pacific Northwest coastline. With ports of call at several Alaskan destinations such as Ketchikan and Juneau, this cruise provides a true sampling of the wonders of Alaska.

COST PER PERSON (person must be a minimum of 21 years old) :